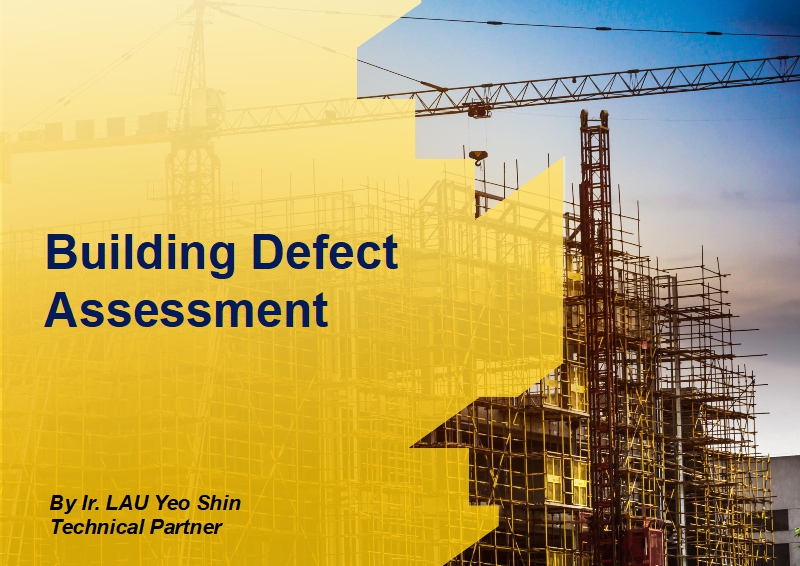 Building Defect Assessment is an assessment aimed to investigate the root causes of identified building defects and subsequently provide rectification solutions to ensure the building can continue in service without causing safety hazards to its occupiers.

Common building defects found in most buildings include non-structural building cracks, ground settlement, and water leakage. They are comparatively less urgent when compared to severe building defects which pose enormous safety concerns to the public and demand urgent attention from related parties, although less often in occurrence. Severe building defects are often related to building stability such as column damage, excessive deformation, or even regional structural failure.

Building defects may not be as blatant as they appear. They may be caused by design defect, material defect, workmanship defect, aging of building, or simply an act of god. Either one or combination of a few aforementioned potential causes leads to the final appearance of the defect as one may observe, which such causes cannot be adequately identified without a careful and thorough investigation by a competent person. For example, cracks of concrete slab may be caused by overloading, under design, poor concrete grade, early removal of the prop during construction, insufficient curing, etc. Another example will be ground settlement which could be a potential consequence of consolidation settlement, slope movement (hilly sites), underground erosion, and failure of soil retaining system. Given such a wide range of possible root causes for a simple building defect that appears straight forward to public perception, it would be too optimistic to not investigate into the root cause before applying any rectification strategy to the defect. An overloaded slab cannot be reasonably rectified by just patching the crack itself nor a ground settlement induced by slope movement can be treated by simply topping up the soil.

In Building Defect Assessment, all potential causes will be adequately and structurally investigated. In addition to the extensive building information collection, various instrumental tests including non-destructive or destructive techniques may usually be adopted based on the justification of the competent person. These tests are designed not only to qualitatively confirm the root causes of identified defects, but also to quantitatively determine the magnitude of contribution by such causes to those defects whenever feasible. As opposed to general Building Condition Assessment which is usually conducted with minimum impact to building occupiers, these tests in Building Defect Assessment may construe temporary nuisance to building occupiers as they may require to assess to the personal living areas or open up certain areas within the building compound for necessary test verifications that could take place for several days or up to weeks.

Building defects are not completely eliminated if the root causes of such defects are not treated together with those consequential defects. Failure to identify the root causes before applying rectification strategies will tend to overlook the critical level of the defects and fail to prevent the recurrence of the same defect in the future. A proper Building Defect Assessment shall not be undermined.