Earthquakes in Malaysia: Should we be worried and how to reduce its impact on our buildings?

Earthquakes in Malaysia: Should we be worried and how to reduce its impact on our buildings?

Hazard from earthquakes is not a current concern although Malaysia has been hit with sizable earthquakes in the recent decade. It has to be kept in mind that the potential for destruction grows each day as our population increases and the development of buildings and infrastructure continues to escalate.

By and large, earthquakes are an alien concept to the Malaysian public. Indeed, Malaysia has been spared of such a natural disaster. Unbeknownst to many, however, the scientific and engineering communities in Malaysia have been probing earthquake science in earnest since the massive Aceh earthquake and tsunami of 2004 which also brought devastations to the Northern region of Peninsular Malaysia.

Are there earthquakes in Malaysia?

In June 2015, a 6.0 magnitude earthquake hit Ranau in Sabah, killing 18 and damaging local infrastructures and buildings.

In November 2007, three earthquakes ranging between 2.5 to 3.5 in magnitude occurred in Bukit Tinggi. The town has been further jolted by more than ten earthquakes in the last two months, causing damages in particularly to structural elements of buildings.

What causes an earthquake?

In order to understand what causes earthquakes, we need to know what our Earth is made of. On a macro level, our planet is formed by an outer solid layer called the crust, a highly viscous layer called the mantle, a liquid outer core and a solid centre called the inner core.

The crust comprises eight tectonic plates that move relative to each other. These plates are giant segments of the earth crust that move up to 100mm each year. They sometimes clash and when they do, a series of vibrations occur.

Plates can clash in three different ways: converge, diverge and transform. When they converge, there is one tectonic plate on top of another, forming trenches. When they diverge, they move away from each other. This causes the magma from under the plate to feed volcanoes and overflow. Lastly, when plates transform, they rub together. If any of these clashes happen underwater, a tsunami is created. 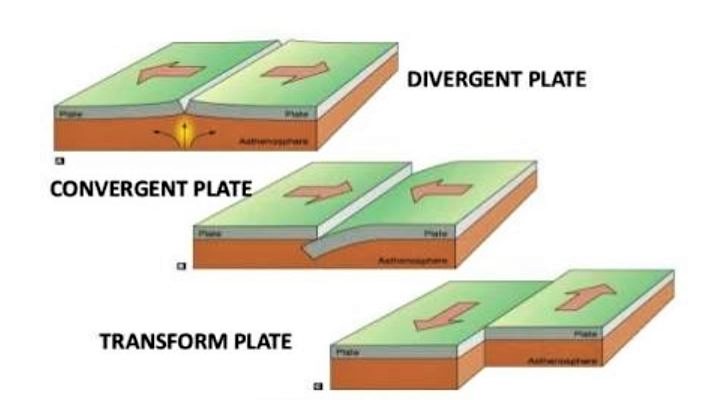 Movements along the boundaries of tectonic plates. © Earthquake Explorers TM

Tectonic earthquakes are caused by a rupture of faults: breaks in the Earth’s brittle shell along which plates and blocks move relative to one another. Indeed, the greatest earthquakes and tsunamis on Earth are generated by its biggest faults.

When an oceanic plate collides with a continental plate, the heavier oceanic plate bends and slides beneath the continental plate. This downward bending is called subduction and results in the formation of a zone called a subduction zone. The plate that bends usually curves into the mantle, forming a v-shaped zone in the ocean that is very narrow. This curving also gives rise to a series of stunning phenomena such as the formation of trenches and volcanic eruptions. Earthquakes can also give rise to other natural disasters such as landslides.

SEE WHAT OTHERS ARE READING:
❓Building quality: How to improve Malaysia’s construction practises
🏠What do property buyers need to know about Plot Ratio in Malaysia?

Should we be worried about earthquakes in Malaysia?

Southeast Asia lies adjacent to the boundary between the Indo-Australian and Eurasian plates, also known as the Sunda megathrust fault. After lying dormant for about a thousand years, a sudden slippage of a 1,600km-long section of the fault caused uplift of the seafloor between Aceh and Myanmar, resulting in a great earthquake and the Indian Ocean tsunami of 2004. Three months later and just a little bit down to the south, a sudden slippage of a 350-km length of the fault beneath Simeulue and Nias islands caused another devastating earthquake but with a smaller tsunami.

Because it takes centuries for tectonic strains to build up again after such big earthquakes, these two events are unlikely to recur within the next hundred years. According to research papers, however, areas farther south, namely offshore West Sumatra and Bengkulu provinces, will likely see another great earthquake and tsunami within the next few decades. Although Peninsular Malaysia is located on a stable part of the Sunda plate, it is seismically influenced by the very earthquake-prone fault and subduction zones of Sumatra. On top of that, there are also a few active faults lines in the Titiwangsa Range (Peninsular Malaysia) and Crocker Range (East Malaysia).

Are there earthquake hotspots in Malaysia?

In Sabah, the areas of Ranau, Kudat and Lahad Datu suffer from the highest Peak Ground Acceleration (PGA) value of > 12%. PGA is the largest increase in velocity recorded by a particular station during an earthquake. In Sarawak, Niah has a moderate PGA value of 9%. Other risky areas include Miri, Bukit Mersing and Sri Aman. In Peninsular Malaysia, Bukit Tinggi has moderate PGA value at 9%. Other areas with medium earthquake risks include the centre of Kuala Lumpur, Kuala Pilah, Manjung, Temenggor and Kenyir. How dangerous are earthquakes?

The table below showcases what earthquakes actually feel by the Ritcher scale:

Earthquake hazards depend heavily on soil profiles and the height and mass of buildings as well as their structural integrities. Malaysia has especially seen a rise in landslide hazards – According to the Department of Mineral and Geoscience Malaysia, our country has suffered more than RM billion in economic loss due to over 400 landslides between 1973 and 2019. It is also expected for Malaysia to lose an additional RM 17 billion in the next 25 years if a comprehensive mitigation plan is not seriously taken into account. Find out what are the adverse effects of climate change on our buildings.

How to increase the safety and resilience of buildings against earthquakes Malaysia experiences earthquake tremors from neighbouring countries Indonesia and the Philippines, as well as seismic activities in the active fault zones of the Titiwangsa Range in Peninsular Malaysia and the Crocker Range in Borneo Island.

Despite the availability of earthquake modelling and assessment technology, the epicentre and intensity of earthquakes cannot be predicted. In some earthquake-prone areas, building codes are complemented by seismic codes that specify calculation methods and strength values of key structural elements to avoid building collapse during an earthquake and tremor. Countries where seismic codes are not implemented such as Haiti, Pakistan, China and Nepal suffer from massive losses of life and economic setbacks.

We must take proactive action to prevent calamity as a result of increased seismic activities. The Malaysia National Annex MS EN1998:2015 Eurocode 8: Design for Structures for Earthquake Resistance is at the moment only a guideline and not mandatory. Considering the potential devastation and damage that can arise from earthquakes, we must act NOW.

Numerous authorities, non-governmental organisations (NGOs) and academia have joined forces in seismic research and publication of building standards. In the absence of adequate facilities and expertise, the Malaysia Meteorological Department has diligently carried out data collection and analyses through its network of seismograph stations. Local universities have also played their parts in earthquake mitigation strategies.

In 2017, the Department of Mineral and Geoscience Malaysia (JMG) in collaboration with governmental agencies, non-governmental agencies and universities published the Seismic Hazard Map of Malaysia. The seismic hazard map has been included in the MS EN1998:2015 Eurocode 8 and can be used by local planners and building officials to set appropriate standards in building and retrofitting in their areas.

The British Standard BS EN 1998:1:2004+A1:2013 outlines the performance requirements and compliance criteria, ground conditions and seismic action, and rules and design of various types of new buildings. Since our country is not located within the Ring of Fire, these guidelines provide reasonable safety resilient measures against different degrees of earthquakes.

For existing buildings, city mayors and heads of local governments have a duty to safeguard buildings under the Street, Drainage and Building Act 1974. These officials must come up with earthquake evacuation plans and encourage owners of existing buildings to carry out structural strengthening of their buildings. For new construction projects, earthquake resiliency must be integrated into the building designs, particularly in areas known to have earthquake threats. Prevention of losses of life and property requires a strong political will and collaboration between all levels of professionals and the general public.

TOP ARTICLES JUST FOR YOU:
🤔 Home Renovation: What approvals to obtain and other tips for house owners
🏡Certificate of Completion and Compliance (CCC) in Malaysia: What you need to know
💧 Water leakage in flat roofs: What is the cause and how to prevent it with proper waterproofing?

Email at [email protected] or WhatsApp us now 😊