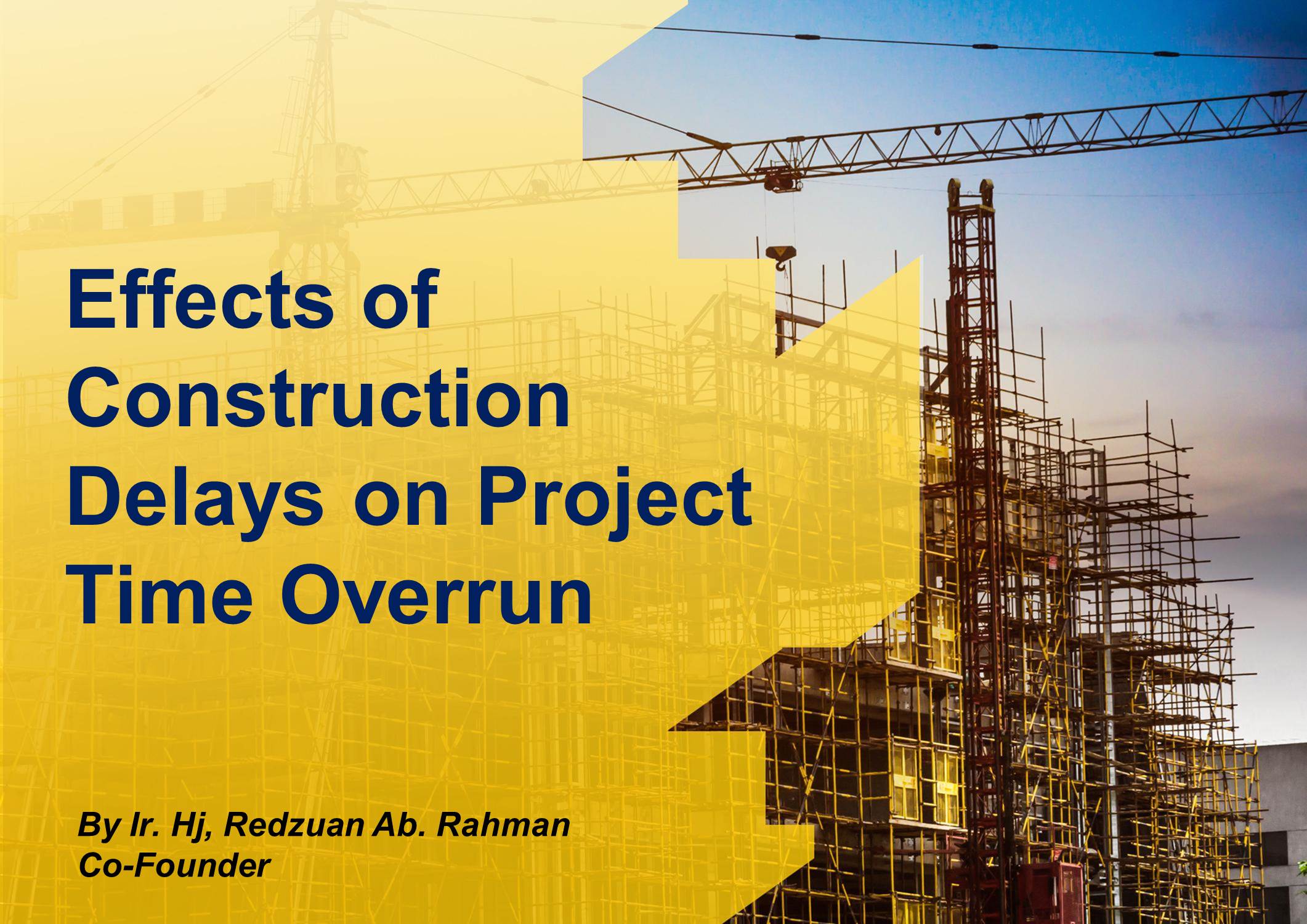 Construction delay is considered as one of the most recurring problems in the construction industry and it often adversely affects project success in terms of time, cost and quality. In most cases, the failure of project is mainly related to the influence of consultants, contractors and owner on project performance. Effect of delays are costly to all parties concerned and very often it will result in disagreement, cost overrun, arbitration, litigation, total abandonment, and project infeasibility. Construction is a risky industry with uncertainties due to various external and internal factors that influence the construction process.

One of the major factors causing time and cost overrun in projects is consultant’s design errors or misrepresentation of client’s requirement. Usually these errors will only reveal during construction phase. Consequently, this will lead to extra time and cost spent on correcting the mistakes. Apart from that, design errors could cause time and cost overrun as the initial costs estimations were done based on the incorrect designs. As such, there could be omission or additional works, thereby leading to extra work or variation orders. Moreover, consultant’s delayed response and less coordination with contractor also contributes to the delay. These will no doubt affect the overall project delivery time and cost. The most common causes of design errors are inadequate field investigation, error in design and specifications, plan errors, design changes etc. Hence, good communication within the project team (including owner, consultants and contractors) and effective project planning, controlling and monitoring are substantial to minimise design errors.

Another important reason for time and cost overrun in project lies in the procurement and contractual management system. A comprehensive contract shall state every aspect of a business relationship, including pricing, payment terms, types of services or products, etc. Therefore, ambiguous contract which does not clearly state the entire project scenario may lead to dispute between the parties involved in the project. For example, if the contract does not completely identify every relevant aspect of the scope of work, dispute may arise out of consultants or contractors’ dissatisfaction over additional scopes which were not stated in the initial contract. When such dispute occurs, negotiations, arbitration and/or mitigation works and request for review of the contract with new budgets and schedule are unavoidable. Unsurprisingly, this will result in extensive delay and thereby exceeds initial time and estimated cost. Besides, the selection of contractor is essential for the success of a project. Contractor’s improper planning and scheduling affects the project duration. The lack of experience also affects the ability of decision making which may result in not only delay but also rework, which incurs additional costs.

The complexity of project could also be a contributing factor to time and cost overrun. The complexity of a project can be determined by the size of the project, diversity of stakeholders, and degree of scope changes. For instance, most mega projects tend to have relatively long implementation period compared to small project. Longer construction period has higher possibility for the initial budget to be insufficient to complete the project. This may due to inflation, changes in material price and exchange rates. Any changes in scope during construction period could result in increasing the complexity of the project itself. The project schedule and budget will have to be reviewed which means more time and resources will be implicated. Not to mention the lengthy process of integrating interests and opinions of the stakeholders.

There are also underlying factors that could cause time and cost overrun in the post-construction phase. Unexpected delays and costs are often incurred due to dragging of handover activities related to issues such as unsatisfactory rectification works, client’s acceptance, disagreement of final account, and unresolved change orders. Similarly, dispute and delay could be caused by delay in payment to consultants and contractors after project completion. These factors could delay the discharging of the project team and causing extra overhead expenses.

In order to always keep the project on the right track, constant and effective planning, controlling and monitoring are required throughout the project life cycle. Project Manager needs to determine and integrate the project scope, milestones, key activities, delivery time, stakeholders, and other important aspects into the project planning. Delays can be minimised by identifying the causes in the first place. Besides having professional and competent consultants and contractors, the Project Manager needs to establish a control procedure to monitor the identified issues that are causing the delay. Nevertheless, a project’s success relies heavily on the project team, hence, the goals and scope must be clearly defined in the early stage, so that the project team has a clear knowledge of its objective and then only a good project team could be built with the project success interest at heart.