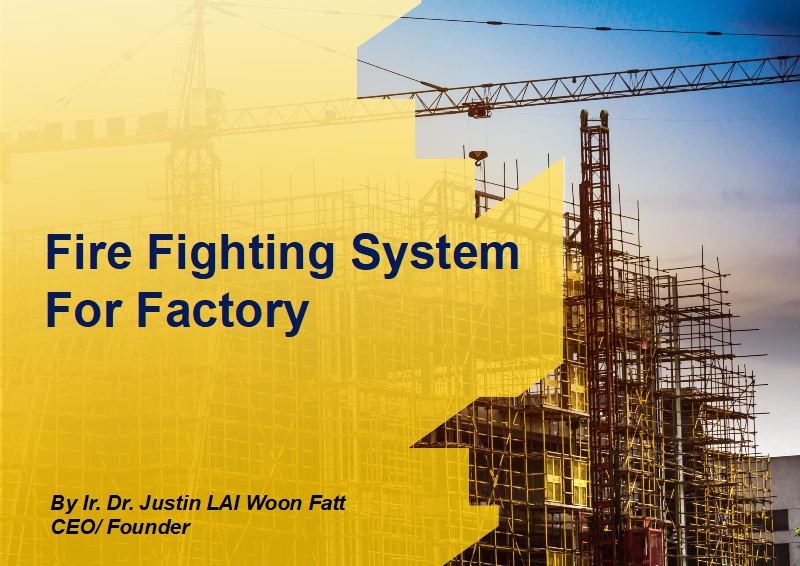 A fire fighting system is probably the most important of the building services, as it aims to protect human life and property, strictly in that order. It consists of three basic parts such as a large store of water in tanks, either underground or on top of the building, called fire storage tanks, a specialised pumping system and a large network of pipes ending in either hydrants or sprinklers (nearly all buildings require both of these systems).

What type of requirements for Fire Extinguishment Alarm Systems and Emergency Lighting for factory? 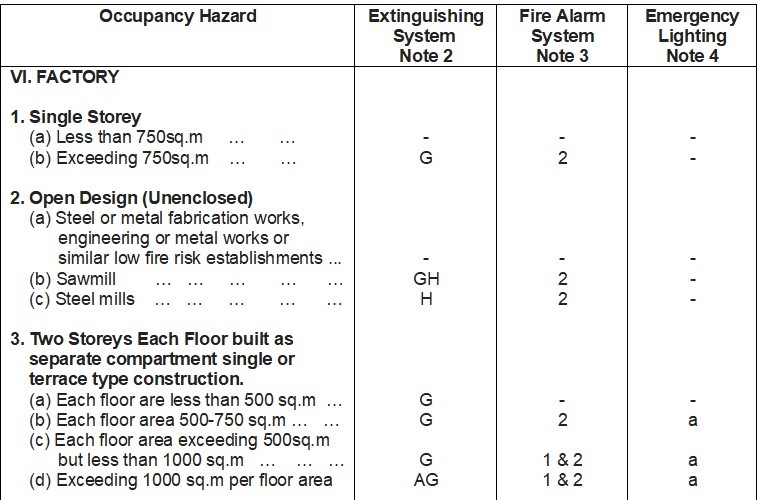 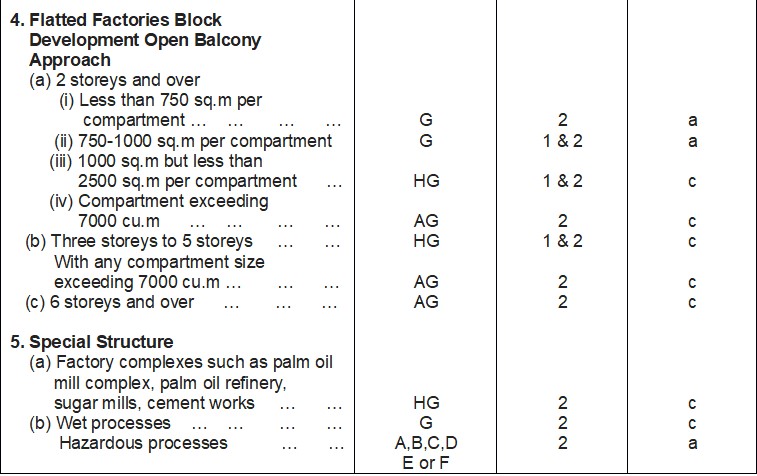 NOTE:
1. Factories in operation after hours of darkness shall be required to provide emergency lighting as required by the Fire Services Department.
2. Special risks or hazardous processes or storage shall be required to provide fire protection requirements as required by Fire Department.
3. The walls shall be returned in 100 millimetres solid masonry construction for not less than 1 metre between walls separating staircase and wall separating each unit along the balcony approach and not less than 0.5 metre along wall separating each unit and the exterior walls.

An extinguishing system is a system used to protect the building by extinguishing the fire. For instance, the sprinkler bulbs on the automatic sprinklers will break and release water to extinguish the fire when it detects heat. This system can prevent the fire expand in the first place when a fire happened. There are also different media to be used for different fuel of fire. High expansion foam system, carbon dioxide system, and approved halogenated extinguishing system are the system using foam, gas, or chemical as extinguishing media. The users in the building will be warned and given time to exit the space before the system release the extinguishing media. A hose reel is the most common device in a building’s compound as it is easy to be used to extinguish a small fire. Normally the system is paired with tank and pump but depends on the size of the building. A hydrant system is usually to be installed outside of the building along the access road. The hydrant pillar should not be apart more than 90m from each other.

The function of a fire alarm system is to warn the people in the building when a fire happened. There are several devices that work together in this system. For example in an automatic fire detectors system, the detector is used to determine the fire. During the fire, the detector will send the signal to a centralized alarm system. Then the signal will be transferred to the alarm. The alarm will be activated once it receives the signal. At the same time, the centralized alarm system will also alert the nearby fire brigade. For the manual electrical fire alarm system, the emergency button is set at various places for the people in the building to activate the alarm system manually. The button is covered with a break glass for easy breaking using hand or fingers during an emergency.

An emergency lighting system is important especially in a big compound building such as production or warehouse area. People need a light source to escape the building when the power supplies outage during the fire. The emergency light units are important to brighten up the building for the people inside the building to see clearly. The exit signs indicate the escape direction for the people to exit the building in the shortest route. There are different types of backup power supply for the lighting system such as central power source and self-contained power source. A signal point unit is self-contained power source and a central battery system is a central power source to supply power from a battery to all the lighting units.

Nevertheless, besides referring to UBBL, it is crucial to pre-consult with the local Fire and Rescue Department (BOMBA) as they may impose additional requirements sometimes. Thus, it is important to engage a professional engineer to design a proper fire fighting system and get approval for your factory accordingly.